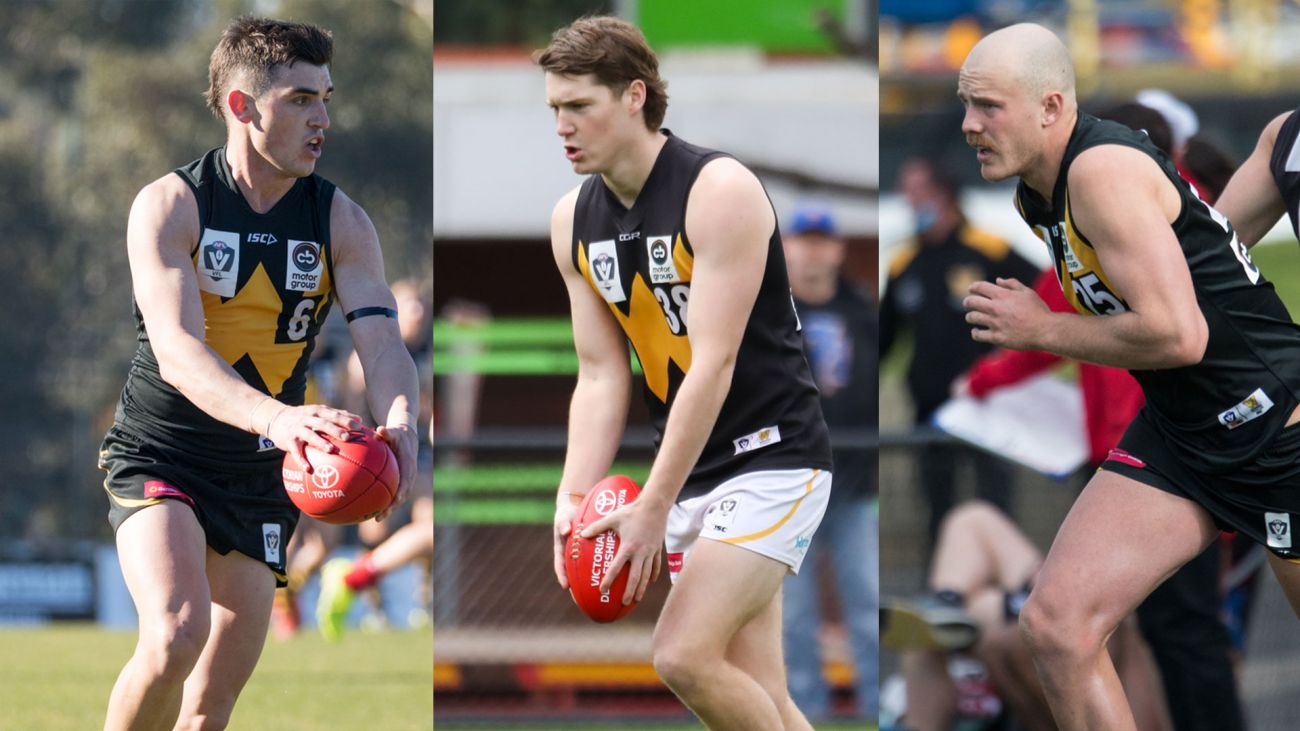 Two of Werribee’s breakout stars along with a mid-season recruit have put pen to paper to remain at Avalon Airport Oval next season.

Shaun Mannagh and Hudson Garoni were among Werribee’s most important players in 2021 while Aidan Johnson’s recommitment is good news for the club’s key position stocks.

This season was Mannagh’s first at Werribee after playing 26 times for Richmond’s VFL side over three campaigns.

After missing selection in Round 1, the pacy half-forward/mid starred in his debut the following week against Williamstown and immediately became one of the team’s most damaging players.

He averaged 20 disposals across eight matches and booted 15 goals while also leading the team in both inside 50s and score assists per game.

After joining Werribee in 2019 and making two appearances, Garoni played every game this season while emerging as one of the best young key forwards in the VFL.

He led the team with 19 contested marks and was second in the club’s goal kicking with 17 majors.

Garoni and Mannagh who both hail from the Albury Wodonga region are joined in re-signing by another former Ovens and Murray standout in Johnson who made the move to Werribee after a couple of strong seasons for Lavington.

Johnson made his debut in the final game of the season as a late replacement for captain Michael Sodomaco with the club excited by his ability to play as a key forward and in the ruck.

Werribee football manager Mark Micallef said all three will be crucial for the club going forward.

“Hudson had a fantastic year. After 2020 was cancelled how he approached the year was first class. He came back to us in ripping condition and has continued to work his backside off. Hudson’s extremely coachable and with young key forwards being so hard to come by, we think we have arguably the best one in the VFL, and we believe he has the potential to play at a higher level,” he said.

“Shaun was also outstanding in 2021 and is someone we expect to be right up there in our best and fairest. He is one of the first at the club each session and is really committed to working on his craft day in and day out. He’s got really good running capacity and can hit the scoreboard on a regular basis, and we can’t wait to have him back as an important part of our forward/mid rotation.

“Our recruiters did a magnificent job identifying Aidan playing at Lavington. We were really keen to get him down mid-season and sign him for the remainder of the year. Aidan has a lot of attributes we were looking for and his ability to play as a key forward and in the ruck is a great addition for us. We look forward to seeing what he can do in 2022 with a full VFL preseason under his belt.”