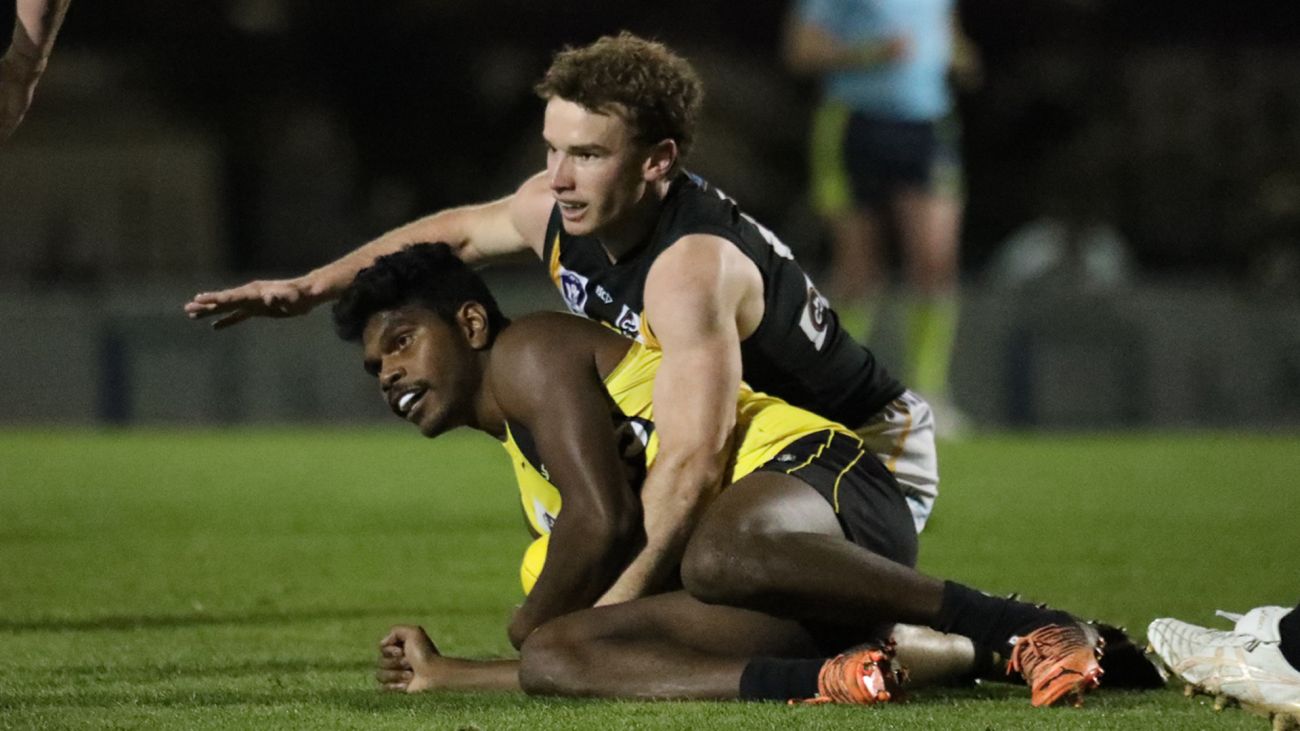 Werribee has celebrated victory in the first Wednesday night VFL match in 64 years downing Richmond by 37 points at Punt Road Oval in Round 12.

The Big W took just 20 seconds to score the opening goal of the game and controlled much of the play for the first three quarters to gradually build a match winning lead.

Werribee stretched its advantage to 48 points early in the last before Richmond, fielding 18 AFL-listed players, reduced the margin slightly. In the end the visitors comfortably claimed a third straight win to move to 5-4 on the season.

Werribee were fast starters for the third week in a row with Hudson Garoni grabbing the opening major just 20 seconds in with a quick shot on goal after the ball spilled to him at the back of the pack. Richmond’s reply took just over a minute before Garoni had his and Werribee’s second at the 11-minute mark as he converted from the set shot thanks to a free kick. Matt Hanson snapped Werribee’s third just after the mid-point of the term, but the next 14 minutes only delivered a single Richmond behind as both teams enjoyed periods controlling the play, but ultimately struggled to capitalise inside 50.

Scoring continued to be hard to come by early in the second term and after Werribee squandered its first couple of chances Richmond goaled after 10 minutes of play. Shaun Mannagh against his old side, kicked Werribee's first of the quarter at the 17-minute mark before Jay Dahlhaus and Sam Clohesy nailed later opportunities to give Werribee reward on the scoreboard. The visitors looked to be heading to the main break with a 29-point advantage, but Noah Cumberland goaled on the siren to cut the margin to 23. Tom Gribble (28 disposals), Ollie Harahan (23) and Michael Sodomaco (20) were all influential in opening half while key link man Nick Hayes 11 disposals and 7 tackles also enjoyed a strong half.

It was two unlikely types that provided Werribee’s opening goals in the second half. Lou Pinnuck hit the scoreboard first with his goal coming five minutes in after a 50-metre penalty resulting from strong tackle at halfback. Three minutes later Sam Conway coolly slotted his first VFL major after a contested mark close to goal. Hanrahan gave Werribee three in a row with a classy snap midway through the term and when Garoni snagged his third from point blank range Werribee had its biggest lead of the night. Another late Richmond goal saw Werribee with a 41-point buffer heading into the last having dominated the middle two quarters enjoying 49% and 56% time in possession in the second and third terms compared to Richmond with 30% and 28% TIP.

Werribee’s defence had been close to impassable over the course of the first three quarters with Nick Coughlan, Nathan Cooper, Reuben William and Pinnuck all brilliant in repelling many of Richmond’s attacking efforts. With the result all but confirmed the hosts enjoyed their best quarter of the match in the last adding four majors while Dahlhaus with two and Harry Stubbings were the goal kickers for the Big W. Richmond’s final score of 8.6 (54) was the identical tally Werribee limited its previous two opponents to - GWS in Round 9 and Collingwood in Round 10. Werribee finished the match +84 in disposals, +46 in contested possessions, +27 for inside 50s and +14 in tackles.