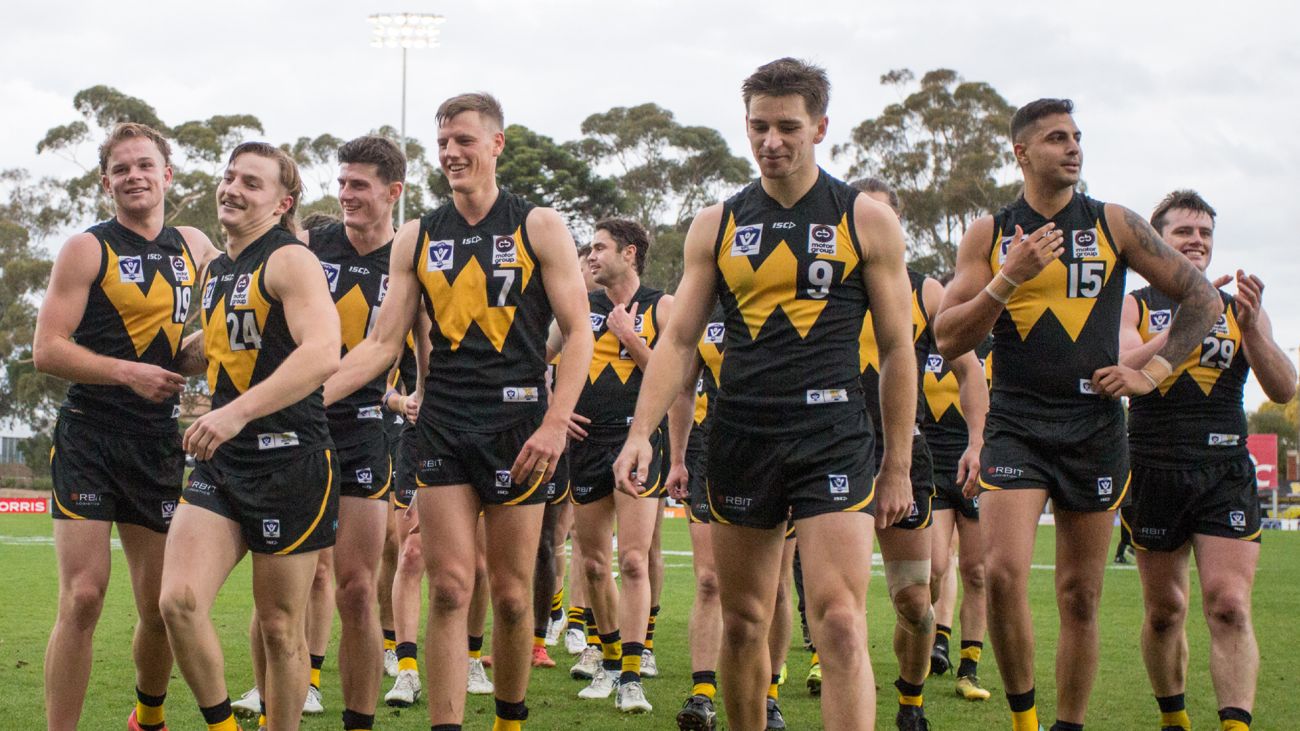 Werribee has moved within percentage of the top eight after an emphatic win over Geelong at Avalon Airport Oval in Round 13.

After a tight opening term the Big W kicked away in the final 15 minutes of the first half to lead by 31 points at the main break. The margin remained 31 points after three quarters before Werribee finished with a six-goal final term to secure victory by 63 points. It was Werribee's first victory over Geelong since 2014.

Shaun Mannagh was instrumental in Werribee notching a fourth consecutive win with the dynamic forward receiving the Damian Drum Medal after a scintillating three-goal performance. Drum, a former captain of both Werribee and Geelong was also on-hand to present the award named in his honour.

It was a brilliant opening 30 minutes of footy with the momentum changing several times throughout the first quarter. Hudson Garoni got Werribee off to another good start kicking the first goal of the game eight minutes into the contest, but Geelong would soon take the lead with two quick goals. Werribee’s response was swift with Nick Hayes and Sam Clohesy adding back-to-back majors to give the Big W a nine-point lead at the 23-minute mark. The Cats hit back in the final five minutes courtesy of Ratugolea’s second with the difference five points at the first break.

It was Werribee who did nearly all the scoring in the second term as Matt Hanson, Tom Gribble and Ollie Hanrahan controlled the midfield battle. However, it took some time for the home team to register its dominance on the scoreboard having kicked 3.8 up to the 10-minute mark of the second quarter. Shaun Manngh was the one of the key architects in Werribee building an important halftime lead with the classy forward kicking the first goal of the of the term before becoming provider for Hanson. Mannagh picked out Hanson with three pinpoint passes in six minutes with the best and fairest winner having no problems nailing his three set shots.

The third quarter was another evenly matched period with both teams kicking 3.2. It took Werribee just over a minute to score its first goal with Mannagh again providing silver service inside 50, this time to Tom Boyd. Geelong replied with two majors in the space of a minute and would dominate much of the next 10 minutes, however Werribee was able to weather much of what the Cats threw at them with the defence led by Nick Coughlan and Lou Pinnuck stepping up. Hayes gave the Big W a steadying goal at the 20-minute mark with his second of the game, before Boyd got on the end of another Mannagh pass to provide a late response to Geelong’s third goal of the term.

Another Mannagh goal helped stretch Werribe’s advantage early in the last and then after a couple of missed opportunities from Geelong the hosts put the game beyond doubt kicking three straight majors through the middle part of the term. Mannagh and Hanrahan both capped off brilliant games by added their third majors either side of Geelong’s lone fourth quarter goal. Mannagh was named best afield receiving the Damian Drum Medal after having 23 disposals including 15 score involvements and 8 direct assists. Werribee finished the game +114 in disposals and +59 for uncontested marks. They also had twice as many inside 50s (66-33) and topped the tackle count.